Have you read “Spare Parts: Four Undocumented Teenagers, One Ugly Robot, and the Battle for the American Dream” by Joshua Davis? The book came out in 2014 and the movie in 2015. Davis tells the inspiring, true story of four Latino high school students born in Mexico and raised in Phoenix, Arizona and how they competed against some of the best college robotics teams, including MIT. You’ll have to read the book to find out what happens. 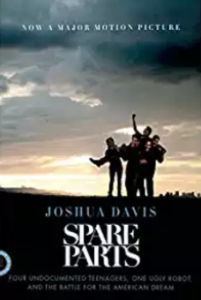 With immigration being such a hot topic these days, we thought it would helpful to provide you with an update on the Dream Act and federal financial aid funding for undocumented students.

The Dream Act (for Development, Relief, and Education for Alien Minors) is a legislative proposal for a process for illegal immigrants in the United States that would first grant conditional residency and upon meeting further qualifications, permanent residency, and eligibility for Title IV financial aid. The bill was first introduced in the Senate on August 1, 2001 by United States Senators Dick Durbin and Orrin Hatch. It has been re-introduced several times but has always failed to pass.

Since 2001, members of Congress have introduced several forms of this bill in both the House of Representatives and the Senate. Members in the House passed one such bill on December 8, 2010 by a vote of 216-198, Senators debated a version of the Dream Act on September 21, 2010, but it never came up for a vote. A previous version of the bill, S.2005, which required 60 votes to gain pass, failed on a 52-44 vote in 2007, 8 votes short of overcoming a filibuster by senators opposed to the bill. Similar bills were introduced in 2009, 2010, 2011, and 2012 with never enough support to gain passage.

The major changes proposed in the Dream Act of 2017 including:

Even at in-state tuition rates, paying for college is often a challenge, especially because DACA and undocumented students are not eligible for state or federal financial aid. Undocumented and DACA students must explore alternative sources of private funding.

DACA is likely to become front and center in September. While the Trump administration has indicated it will preserve the program, several state attorneys general are threatening to challenge the program in court. Congress also has to pass a funding bill in September and ending DACA is one of the many bargaining chips in the debate.